BookQW is here with fun excerpts with the word voice-- from One Night in Havana: 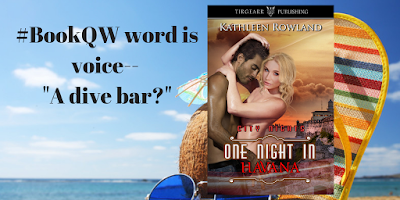 “Why, Veronica Keane.” A voice heavy with a Spanish accent drawled from behind her. “A dive bar?” A taunting tsk. “What do we have? A slumming New Yorker?”
She stiffened and closed her eyes. She knew that voice and its owner, Dr. Carlos Montoya, a finalist like her, competing for the same damn grant at the biggest Cephalopoda conference of the decade. Her heart pitter-pattered against her ribs. To turn toward him would intimate distress, or worse yet, weakness. She wouldn’t fail to win this grant, not when she was a final contender. “I like this funky little place.” Sia Macario Café, smack in the center of Havana, allowed her to observe locals and their daily lives.
“You need to eat with all the mojitos you’ve downed.” The big tease wasn’t  counting. This was her first drink, but his rumbling, sexy timbre hinted at all kinds of dark, hot promises. She’d rubbed shoulders with the Cuban scientist all week. This splendid specimen of Latin male brought on a physical ache that punched low.
A flare-up stirred fear. For her own good, she needed to resist. “I ordered camarones enchiladas.” By now she knew the menu on the chalkboard by heart. She tipped her head back to whiff grilled shrimp soon to arrive in sofrito sauce with fried sweet plantains.
“The flan is good. Just like my abuela makes.”
“I bet. Your grandmother would be happy to hear that,” she said, knowing he brought out the best in most people. Two days ago he'd invited her and a handful of others scuba diving. The chance to ogle him had been one of the perks. He’d worn nothing but swim trunks, his bare chest on display. Every glistening muscle was finely etched. Not a drop of fat on him. Since he’d not given her the time of day, she’d checked him out without him noticing.
The hard-bodied host had led the way toward habitats of soft-bodied creatures. To find where invertebrates lived was never an easy task. Octopuses squeezed into narrow passages of coral for protection and gave females a place to keep their eggs. She’d discovered the remains of a few meals nearby. Octopuses scattered rocks and shells to help them hide.
This grant meant so much to her and no doubt to him as well. Veronica mindlessly toyed with the gold necklace around her neck, but anxiety crackled through her brain. Unlike this man of action, she lacked the flamboyant personality necessary to talk people into things. Carlos had that ability. He'd made friends with judges on board while she’d conversed with an older woman about a box of scones made with Cuban vanilla cream.
That day the wind had picked up to a gale force, and this woman named Bela with Lucille Ball red hair needed help walking to her home. The half mile down the seaside promenade, The Malecón, had provided her with time to practice her Spanish. Turned out Bela was Carlos’s grandmother. She’d worked as a maid when the Castro government came to power. When private homes were nationalized, titles were handed over to the dwelling occupants. Bela owned a crumbling home in the respected Verdado district and rented out rooms.
What Veronica detested about Carlos was his abnormal level of talent for schmoozing. Not that he wasn't charismatic; he drew her like a powerful magnet with emotions hard to untangle. Why was a self-assured woman who ran her own life thinking about a man who commanded everyone around him?
She inhaled a breath and turned around on the barstool, caught fast by a gut punch of Carlos Montoya in the flesh. She sighed and surrendered to the tendrils of want sliding up between her thighs.
Tall and muscular, his lush dark hair curled to his collar giving him a wild, roguish appearance. His face was lean and chiseled. His mouth full and tempting. His eyes the smoky-gray of a grass fire and fringed with black lashes as dense as paintbrushes. He smiled. A faint hint of mockery curved his mouth, a sensual mouth she imagined to be either inviting or cruel. Or both at the same time when he leaned over a woman with a diamond-hard gleam in his dark eyes while she drowned with pleasure. She fought a fierce desire to run her hand across his broad chest, tip her face upward, and…
His breath tickled her face.
Not going there. She blinked and forced her mind to focus. Carlos Montoya was not the kind of man you lost focus around. But that image of putting her mouth full on his and peeling away his shirt once introduced in her mind was impossible to expunge. Pointless even to try.