#ContemporaryRomance spotlight on A SUITE DEAL by Kay Layton Sisk-- a Holt Medallion winner. Please visit for a meet and greet with a book blurb.

Today I have my spotlight on Kay Layton Sisk, an awesome author and her book, A SUITE DEAL! Pretty darn sweet that A SUITE DEAL won a HOLT Medallion for Short Contemporary.

It's not enough that the perky redhead has been in his way from Dallas to Orlando, but now a hotel suite mix-up has David White sharing a living room with her, her mother and her niece. How' s a man supposed to conduct business at the convenience store convention and still have time to prep for a job interview with WOTs-New-Now's president? Somehow wanting to jump ship from his dead end job has him jumping through hoops for her instead.

Even though she's a vice-president of the family business, Megan O'Toole is less than pleased when her father delegates a job interview to her while she's in Orlando. Add to that, her mother and niece are along for the ride and the hotel has mixed up the reservation so that they're sharing quarters with a too handsome man and his twin brothers! Their chemistry is off the wall making her forget that she has a job to do.

Is it a case of miscommunication and misdirection or simply A Suite Deal? 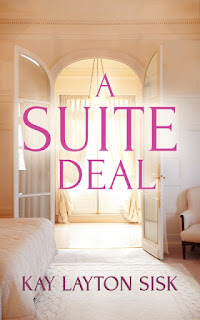 Native Texan Kay Layton Sisk began writing books in third grade featuring such wonderful creatures as The Rainbow Monster. That may be hidden deep in the closet with the television fanfic she wrote throughout high school. Then life took over and didn't release her to write again until staring at a computer screen resulted in more words than numbers.

Today she makes her home with one husband and two demanding cats. Writing romance fills the hours between feedings!