Today I have my spotlight on Kris Bock's suspenseful adventure with romance-- The Skeleton Canyon Treasure. 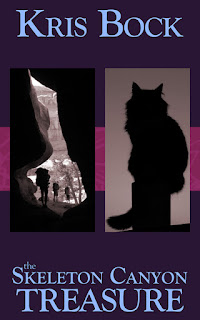 
Camille Dagneau – beautiful, brilliant, and prickly – isn’t quick to trust, especially when a strange man has broken into her machine shop at night. But Ryan MacAllister insists he’s merely looking for his missing uncle, who has disappeared while hunting for a lost treasure. He believes Camie is the key to finding the treasure, and his uncle. Camie can ignore the attraction she feels, but she won’t pass up the chance for an adventure.


The pair set off with Camie’s feisty cat Tiger to track down the clues in the missing man’s journal. Graveyards, steep cliffs, and creepy caves don’t intimidate Camie, but she’ll need to trust Ryan to overcome all the challenges that stand in their way. A man’s life is on the line and time is running out, but her heart may be the one thing Camie is not willing to risk.


Join the fun! The Southwest Treasure Hunters novels include The Mad Monk’s Treasure and The Dead Man’s Treasure. Each novel stands alone in this series mixing action and adventure with light romance.


“If you like strong women and adventure, you’re going to love this.”


He took a step toward her. “OK, I’m looking for someone.”


“A minute ago you were looking for me.”


He blew out a breath. “My uncle. He’s missing and I’m worried something happened to him. The trail led me here. I wasn’t sure at first which side you were on, and that’s why I wanted to look around before talking to you. But now that I see you, I can tell you wouldn’t have had anything to do with his disappearance.” His blue eyes twinkled, and the confident smile gave him a certain appeal. But if he thought she’d fall for shallow flattery, he was much mistaken. Even assuming one could consider it flattering to be told, “You’re probably too harmless to have kidnapped my uncle.”


She was sure he was lying about something, and probably about everything. His appearance shortly after the theft of her invention, a machine that might be worth millions, could not be a coincidence. One chance in 10,000 maybe. He, or his uncle if he really had an uncle, had to be connected somehow.


If she could figure out how, she might get her invention back. Let him keep underestimating her, as most men did. Camie turned on her own charm. She flashed a smile that had him blinking as if the light were too bright. “Let’s get that cup of coffee, and you can tell me about it.” That would get him out of her shop, and into a public place where it would be easier to get help if needed.


She led the way to the student center and gestured to the man as he sat across from her. “Explain. You might start with your name.”


“Ah, didn’t we get to that? I’m Ryan MacAllister.” He grinned. “Age 32. Occupation, mining geologist. Currently between contract jobs. References available upon request.”


She almost asked to see a driver’s license and those references. But better to let him think she trusted everything he said for the moment. “Tell me about your uncle, Ryan.”


He hesitated, but this time she didn’t get the impression he was stalling or making up lies. Rather, he didn’t seem to know how to start. Finally he said, “He’s brilliant. A genius. But, well, he doesn’t quite fit in with normal society.”


Camie nodded. A few of her geek friends fit that profile. Some people would say she did as well. She didn’t consider it a bad thing, since “normal society” tended to suck.


“His hobby is treasure hunting.”


“He’s always chasing after some treasure or another, trying to put together clues from old manuscripts, sort out rumors from facts, and so on. Once in a while, rarely, he’s actually found something.”


“What has he been working on lately?”


“The Skeleton Canyon treasure. Heard of it?”


She shook her head.


He watched her for several more seconds, eyes narrowed in suspicion, before he went on. “Skeleton Canyon isn’t too far from here. Southeastern Arizona, near the New Mexico border. But no one knows where exactly the treasure is, of course. My uncle was trying to piece together some clues. He kept a journal. A few days ago, I received the journal in the mail. No explanation except for a note that said to hold onto it for him.”


She raised an eyebrow. “Wasn’t that the plot of the third Indiana Jones movie?”


Get The Skeleton Canyon Treasure on Amazon – free with KU.


“Counterfeits is the kind of romantic suspense novel I have enjoyed since I first read Mary Stewart’s Moonspinners.” 5 Stars – Roberta at Sensuous Reviews blog


Read excerpts at www.krisbock.com or visit her Amazon page. Sign up for the Kris Bock newsletter for announcements of new books, sales, and more.

Kris Bock in the desert-- 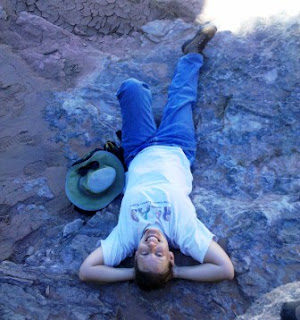