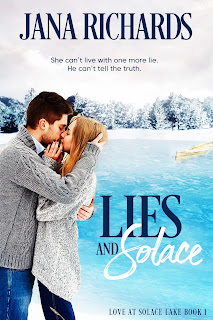 
Love is worth the risk…


When their grandfather dies, the Lindquist sisters, Harper, Scarlet and Maggie, inherit the northern Minnesota fishing lodge that had been in their family for three generations. The inheritance is bittersweet. They were raised at the lodge by their grandparents. The natural beauty of the place hasn’t changed, but the building itself is crumbling and desperately in need of repair. The lodge also reminds them of what they lost. Twenty-two years previously, their parents died there in what was ruled a murder/suicide.


As the sisters struggle to breathe new life into the failing lodge, old fears and questions rise to the surface even as new love presents itself. Why did their father murder their mother? What truths did their grandparents keep from them? The sisters must fight to keep the wounds of the past from putting their futures, and their fledgling relationships, in jeopardy.


Blurb for Lies and Solace:


She can’t live with one more lie. He can’t tell the truth.


Harper Lindquist is convinced she’s found the answer to her financial prayers. Unless she pours cash into crumbling Solace Lake Lodge, she’ll lose her family’s legacy. Her would-be savior arrives in the middle of a Minnesota blizzard and she’s determined to prove to her reluctant, and trapped, financier the lodge is a sound investment. But Harper isn’t completely honest with him. And she has no idea the lake is hiding secrets of its own.

Ethan James is a liar, but his money is very real. He isn’t convinced a broken-down inn is a smart investment opportunity. But the more he understands Harper’s dreams and desires, the more he wants to be the man to make them come true. The trauma in both their pasts means neither can fully trust the other. They must find the courage to love, to trust, and to accept, or yesterday’s sorrows will keep them apart.


She’d just placed the last dish on the drain board when Ethan entered the kitchen, his hair still damp from his shower. He’d shaved with the razor she’d found for him and was wearing his own clothes again. Once more the elegant, well-dressed businessman. The chasm grew between them even as he stood in her kitchen. She was stupid to believe there could ever be anything aside from business between them.


She lifted her chin, determined not to let her façade slip. “I’ve gathered all my estimates and drawings and put them in a bag so you can take them with you.”


They walked together to the front door, and Harper lifted his beautiful overcoat from the coat tree. It still held the scent of his after-shave, and she had to resist the urge to raise it to her nose and breathe it in. Instead, she held it out to him with a forced smile. “Have a safe trip back to Minneapolis, Ethan.”


“Thanks.” He took the coat from her and slipped it on. “I want to thank you for your hospitality.”


So formal. But it was the only way she could get through the next few minutes.


He picked up the cloth bag with all her information on the renovation project. “Goodbye, Harper. I’ll be in touch soon.”


He opened the front door and headed toward his truck. Harper grabbed a sweater from the coat tree and stood in the open doorway watching him leave, not quite able to shut the door on him despite the biting cold.


Halfway to the truck, Ethan stopped. For a second, he stood completely still, his head bowed. Then he dropped the bag, turned on his heel, and walked back to her, his steps full of purpose.


“Did you forget something?”


He pulled her into his arms, his mouth descending on hers with an urgency that set her blood on fire. She moaned as she molded herself against him, her arms winding around his neck, her fingers tangling in his damp hair. He swept her mouth with his tongue, demanding a response. She gave herself over to his kiss, loving the sweet taste of his mouth, the clean smell of his skin, the solid feel of his body.


All too soon he broke the kiss. He grasped her shoulders and pushed away from her, breathing hard. She searched his face for answers.


She nodded, unable to speak. He released her and walked back to his truck. No longer sheltered in his arms, the bitter cold swept through her. She pulled her sweater more securely around her shoulders.


Harper watched Ethan pull out of the driveway, her heart racing. When she could no longer see his truck, she closed the front door and leaned against it. The taste of him remained on her tongue and she could still smell his clean scent. Excitement and fear danced up and down her spine, fighting a duel inside her to decide which one ruled supreme.


Fear won. In one way or another, everyone she’d ever cared about had left her. She couldn’t bear for Ethan to be one more person on that list. 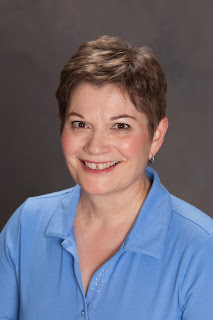 When Jana Richards read her first romance novel, she immediately knew two things: she had to commit the stories running through her head to paper, and they had to end with a happily ever after. She also knew she’d found what she was meant to do. Since then she’s never met a romance genre she didn’t like. She writes contemporary romance, romantic suspense, and historical romance set in World War Two, in lengths ranging from short story to full length novel. Just for fun, she throws in generous helpings of humor, and the occasional dash of the paranormal. Her paranormal romantic suspense “Seeing Things” was a 2008 EPPIE finalist.


In her life away from writing, Jana is an accountant/admin assistant, a mother to two grown daughters, and a wife to her husband Warren. She enjoys golf, yoga, movies, concerts, travel and reading, not necessarily in that order. She and her husband live in Winnipeg, Canada with their Pug/Terrier cross Lou and several unnamed goldfish. She loves to hear from readers and can be reached through her website at www.janarichards.com