Please welcome talented author, Ronnie Allen, and her book, Scorpio, book 2 from her amazing series, The Sign behind the Crime. 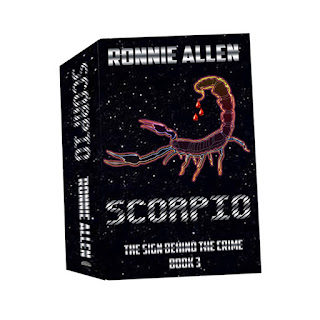 Blurb
With a mind as strong as twisted steel, Scorpio obsessed Henry Slater, suave, sophisticated, sexy, intelligent, and wealthy is the perfect man—except to women who tell him what he doesn’t want to hear.
Dr. John Trenton is called back to NYC for a case close to his heart, while NYPD Detective Samantha “Sam” Wright and Dr. Frank Khaos, conflicted about their on-again-off-again relationship, take on another case—a serial killer who’s orchestrated sixteen murders across the United States over a nine-year period. The seventeenth victim is Sam’s best friend, Carrie Baines. When forensic science connects Frank to Slater, Frank is pushed to delve into his past, something he swore never to do. Meanwhile, due to the interstate nature of the crimes the FBI gets involved, convincing Sam to go undercover. But Slater is clever, and Sam is no match for him. Will her psychic skills and police training be enough to survive this close encounter with a killer, or will she end up as his eighteenth victim? And even if she lives, is her relationship with Frank really over?

A mid-forties dark-skinned man wearing a conservative gray sports jacket at the opposite end of the table spoke first. “I’m Lieutenant Hicks. I know both your histories, and your relationship with Agent Case. Even though your excellent reputations precede you, consider this a professional courtesy, nothing more. Lieutenant Rojas and I go back a long way. At first, I wasn’t thrilled with a task-force for no reason, but I now understand it, seeing what damage this perp has done. Therefore, my precinct and I will give the FBI our utmost cooperation. As for the both of you being here, I know that you, Detective Wright, and the vic were good friends, so we will use what you tell us as a reliable source. Your involvement will end there.”
Sam cringed when she heard him say “vic” instead of Carrie by name. She held her tongue. His last statement made her stomach drop.
“I’ll be directing this interview,” Agent Case said. “Detective Wright, how long have you known Miss Baines?”
“Since kindergarten.” Sam remained focused. She’d only elaborate when he asked the correct questions.
“What can you tell me about her?”
“Referring to?”
“Everything. We need to create a profile to match to the other victims.”
Nick shot Agent Case a glare. “Why don’t you ask Detective Wright specific questions so we don’t go on for hours and waste time?”
Okay, Nick. You’re starting your magic.
Agent Case put his pen down. “Yes, I forgot. This one could ramble. Why would Miss Baines cut work and go to a casino?”
“That’s the million dollar question. One I want the answer to, but more importantly why did the perp choose her?”
“Not going there,” Lieutenant Hicks retorted, not holding back annoyance.
“Lieutenant, with all due respect, if my partner knows specifics, she’ll be able to frame her answers appropriately. Relevancy is crucial. Correct?”
The lieutenant let out an exasperated breath. “All of the murders were in casinos on the east coast. All vics were professional career women.”
“Any prominent differences?” Nick asked.
“Unfortunately, none that we’ve put together, yet,” the lieutenant conceded.
“Okay, Detective Wright, what can you tell us about Miss Baines relationship with her husband?” Case asked. “We know it’s not him, but—”
Sam cut Agent Case off. “I get it. Carrie and Charlie were separated four months ago. She caught him cheating, first through texts on his phone to another woman, then she followed him to an apartment building. She never confronted him.”
“Never confronted him? How can that be?”
“We never had time for a face to face meeting, and—”


“Don’t buy that for a second, Detective.” Case sneered at her. “If you two were that close, you’d be meeting at three a.m. if need be. Girlfriends cry with each other. I think you’re wasting our time, altogether.”
Bio-- meet Ronnie! 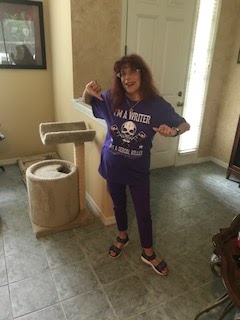 Ronnie Allen is a NYC native transplanted to rural Central Florida nine years ago. A teacher in The New York City Department of Education for 33 years, she also obtained a license as NYS School Psychologist. In later education, she added certification as a Board Certified Holistic Health Practitioner, earning a Ph.D. in Parapsychic Sciences. Ronnie uses her expertise in education, the paranormal, and psychic development throughout her novels.  She’s an advocate for children, and their health and well-being. This is evident in the themes of her novels and in the dedications. Scorpio is the third book in The Sign Behind the Crime series.