Are you ready to play Book Quote Wednesday?  Today's word is USUAL, and two examples are in the excerpt from Unholy Alliance.  In this scene attorney Grady Fletcher asks his client a question. The scene is in Tori Morningstar's viewpoint.  She is just released from prison for a murder she didn't commit, and they are driving along a highway. 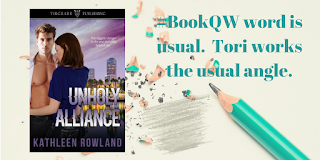 "You sound like a sleuth. What angle are you working?"
"The usual angle. Searching.  Finding Vivienne. McGinn has her," she moaned.
“That’s what you think.”  He shot her a withering look.  “I had this client, basically a good guy.  He needed to get off the grid but didn’t qualify for a legit government program such as witness protection. The poor schmuck got mixed up with the wrong crowd. He looked at old newspapers and found a name of a baby who’d died around his age.”
“Look, Grady.  I know this trick. Let me tell you the rest.   He requested the state government to give him a the birth certificate.”
“Exactly,” he said.  “Many people lose birth certificates.”
“Right. It’s pretty usual to lose one,” she said. “With a birth certificate, your client got a social security card.  Maybe enrolled in college for a student ID. He used these to open a bank account, get a credit card, and driver’s license.”
“Okay, fine. Did Vivienne disappear like this?” His reason for the story was to work Vivienne into it.  His assumption sliced through her skin.
Her outrage rasped like feathers ruffling in anger. She took a breath to calm down, knowing he wasn’t done with his little narrative.
“She’d have to change hair color,” he said.  “Lose or gain weight. Put a tack in her shoe. Walk with a limp.  Move to a crowded city, rent a cheap apartment.  Build an employment history by working some job.”


“Uh huh.” Not up for an argument, she shifted her gaze back to the GPS map mirroring the Jeep as it sped onto a fly-over carpool lane linking up to the 22 West.  The map indicated ten more minutes of travel time and small talk.
at November 15, 2017