Today I have my spotlight on talented author Christa Maurice and her book, Tender is the Night. 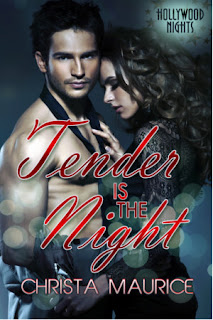 Love is a long journey.

Lisa Benedict needed a date for a bar mitzvah, but when the escort she hired arrives he’s not just good looking, he’s also kind, gentle, and protective. He makes her feel sexy again and she wants to keep him around. But she doesn’t know that the terrible abuse Gale suffered at the hands of one of the Hollywood elite keeps him from being able to trust her no matter how much he wants to.

Gale loved being with Lisa and her sons, but when she put a contract in front of him, he thought she wanted to enslave him as another woman had threatened to. He fled. Months later, with some therapy behind him, he wants to try again. Will she be willing to take him back after the way he stormed out?

And if she does, can he trust her to not reject him when she learns the truth?

“Help me, Gale Wallace. You’re my only hope.”
Gale grinned. “I love that movie.” Too bad they couldn’t stay in tonight and watch it. They could cuddle on the couch, eat popcorn, and repeat their favorite lines. He swallowed. He should not be thinking of his client as a person. It would make the whole date more difficult. But it was impossible not to, especially when she was treating him as an equal.
“Me, too. See, we already have something in common.” She set aside her glass.
“We met at the Starbucks near where you work.”
“Yes, and we ended up chatting.” She patted his knee again.
“About Star Wars.”
She laughed and it was full of joy. "Of course we did. After coffee, we decided to have lunch. My ex had the boys last weekend, so we went to Brandywine on Saturday."
“And you asked me to come with you this weekend.”
“Perfect. I did kind of invite you last Saturday.” She stroked his arm and then yanked her hand away. “I’m sorry. I don’t mean to manhandle you.”
“Actually, to sell it, you will want to.” Not entirely true, but Gale was enjoying being touched by her.
“Oh good.” She rested her hand on his forearm again. “I should probably know what you do. I suppose you want to be an actor. You’re good-looking enough.”
“I tell people that I’m a model, but I do want to get into acting. What do you do?”
“I work for ABN in development picking which shows are green lit for production.”
“That sounds important.”
She shrugged. “I guess it would be if I had any power at all.”
If he leaned in right now to kiss her, what would she do? Kiss back? Slap him? Too soon to tell.

Christa Maurice spends a lot of time lost in imagination. When not writing, she loves to travel and has spent several years living overseas. She spent four years living in Abu Dhabi where the temperature was always hot, the sunrise and sunset were pretty stable year ‘round and she could go weeks without speaking to a man who wasn’t selling her groceries. You know that happens to a woman living in what amounts to a harem situation? She spends a lot of time talking about shoes and thinking about men. Which brings us right back to being lost in imagination…