Today the spotlight is on award-winning author Mia Jo Celeste and her book,  Other  Than.   Her writing is  absolutely beautiful, and she brings her characters alive on the page.   Other Than is published by the Wild Rose Press.   Expect a fabulous read. 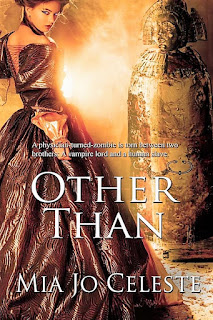 Blurb-
It only takes one drink from the Water of Immortality to kill Evie Woods—halfway. Trapped in undead flesh, the world’s last skin-slider wakens on an island purgatory where a cursed spring bubbles with immortality, and zombie cannibals crave living flesh.
Her only hope of escape rests in the hands of the one man who would see her fail. Bound to her by cords stronger than death, Lord Victor Lowell is both the man of her dreams, and her darkest nightmares. Contrary and intractable, Victor preys on others to maintain his angelic charisma and preternatural prowess. Drawn to the compellingly gallant and vulnerable soul behind his mercurial humors, Evie can only watch as protecting her forces Victor to sacrifice yet more of himself to the ancient evil long tethered to his soul.
Trapped in an ever-escalating war they can’t stop, Victor and Evie fight time for a cure, but as the long days pass blackness tears at Evie, ripping her thoughts from her one memory at a time. Victor will to do whatever it takes to prevent her from deteriorating into a rotting husk, even if it means dooming himself, but Evie won’t surrender his soul without a fight. Battle lines drawn, the soul mates resolve to find redemption or die trying.

Genre- OTHER THAN, a Gaslamp Fantasy/ Paranormal Historical Romance

Author Bio- Mia Jo Celeste comes from a family of writers and English teachers, so it was no surprise when she chose to pursue both careers. She grew up watching horror movies and reading romances. To her, the two genres go together like salty and sweet in kettle corn.

Interview with author Mia Jo Celeste:
How do you come up with your characters? I people watch. I think they/ we are incredibly interesting. I have a t-shirt that threatens, “Careful or you’ll end up in my novel,’ and it’s somewhat true, but don’t worry. I usually write fantasy, so even if someone I knew did appear not even their family would recognize him/her.
Does writing energize or exhaust you? Writing energizes me. I love brainstorming, creating new characters and scenes and then I love working out their kinks.
What types of books do you enjoy reading in your free time or what do you like to do with your free time? I read all kinds of stories, everything, really but my favorite way of appreciating stories is listening to audiobooks or digital downloads.
If you didn’t write, what would you do for work?  I can’t imagine not writing. I’m an English teacher, and I come from a family of writers, so words are my life pretty much.
What real-life inspirations did you draw from for the worldbuilding within your book? Other Than probably is the result of all the Gothic romances I devoured as a teenager and still add to my reading list today. Another example might be my novel Dark Bringer where I combined my childhood fantasies about the dark with a week-long power outage I lived through. I really missed the lights, heat and electronics I usually take for granted.
What do you hope readers take away from your work? That people can change and grow. They can start again. I’m really a strong believer in second changes and in starting over, so many times my characters are on that journey. Most often, they succeed. We all have a broken place in our past and I write the story of its mending.
Does your family read your books? Yes. My husband is my first reader and the dude I sometimes bounce ideas off. My kids think it’s cool that I write although romance isn’t their genre.
Quick Draw:
Coffee or Tea?  Tea.
Jeans or sweats?  Jeans.
Beer or Wine? I’m from Milwaukee, so beer, but I like wine, too.
Chocolate or Chips? Ghirardelli Chocolate

Excerpt:
Her mad dash brought Evie skidding into a wondrous sight. The whole kitchen was awash in a yellow blaze. The bread ovens’ bricks glowed a vivid orange. Sparks like fireflies rode eddies of the heated air that felt soothing under her wet quilt. The water gave her the notion of safety within the beautiful and deadly inferno.
Boots paced above her. A door swung shut.
Hope fluttered in her belly. Mayhap she might just do it—race up the steps, rescue Victor and be out of the kitchen before the flames caught her. She dashed through and mounted the stairs.
Adrenaline fueling her speed, she attempted to outrace the flickering destruction climbing the stairs along her heels—and succeeded. Amazingly succeeded. Apparently, the fire was slowing, as though sated and content to toy with the kitchen.
Perhaps Sesha and Jessup had convinced their Almighty to aid her even after she’d reneged on her promise. She owed them—she’d save the cure in their memory. She sped into the ruined conservatory and got to the table, but the rack was empty. No vials. And the top of Jessup’s desk was clear. His journals and notes were gone.
On the floor, splattered blood led to and from the threshold. She followed it to the phoenix room and sensed Victor beyond the door.
He was alive. She’d found him.
For a moment, she gave in to giddy relief. Then, she turned the knob and entered.
Victor was before her. Surrounded by smoke, but before her.
His hair singed, the right side of his face blistered from heat, the left a deadly pallid, he slumped on the red-quilted bed and mopped at a red gushing hole in his abdomen with his torn off shirt. Seeing her, he straightened. Hope gleamed in his eyes. “You came. I called and you came.”
“You called?” She wanted to lift and twirl him in the air like he did her. Silly maybe. She was as dazed as the phoenix in the wall paper.
Real flames gnawed the hand-painted vines. “Why? Why are you here?”
“You don’t give me much credit.” His eager grin flattened. “Where is that trust, you’re working on?”
She wrung her hands. Their future depended on his next words. “You came because of the Maiden, didn’t you?”
“Damn right. I shan’t spend the rest of my life with her egregious murmurs in my mind nor can I allow her to inflict her will on others.”
She searched his eyes, and then his skin, those small tells, the nuisances of expression that hid deception. They weren’t there. He was earnest. He hadn’t intended to use the statue but destroy it. She swallowed to clear the lump in her throat.
“What did you think?” He waved a bloody hand as if warding off a blow. “No, don’t say.”
Blood. She jerked straight. Hoff had shot him. Here she was fretting over their future while he bled.
“Mayhap, I don’t deserve credit.” Victor’s lips twitched into a sardonic smile.
Always so good at wheedling out her feelings, he’d likely read her concern over his wound. Her vision blurred in the heated air.
“I know I’ve done unspeakable things. Things that need now to be set right. I began last night with you and our relationship. I thought I’d succeeded, but no.”
“You did. You have. It’s me who’s at fault currently. I doubted you, but I don’t now. It’s your health that alarms me. You, I’m sure of. Very sure.” She blinked hard and focused on the goal—Victor. 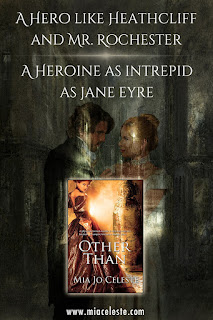