Bittersweet Alliance is up for pre-order on Amazon.  On June 26th, release day, it's free on Kindle unlimited and 99 cents to buy. 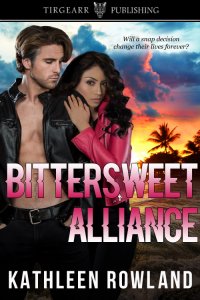 Below is a blurb, followed by an excerpt:
Will a snap decision change their lives forever?

Bizarre kidnappings stun the Big Island of Hawaii, pulling Danker Donahue back into the game and forcing him to partner with Jolene Kualoha, the woman who left him seven years ago when his DNA showed up in paternity lawsuit. The prejudice-motivated hate crimes are the wildest anyone has ever seen. Victims are being poisoned then released once the ransoms are paid, many losing their lives.

In the shadow of Jolene's success as a helicopter pilot, a troubled woman develops a fixation on Jolene and imitates her appearance. Matters turn dark when the copycat is shot dead. Was Jolene the target? Threats mount when she barely survives an accident after her brake cables are severed.

When these crimes threaten her sanity, Jolene is forced to trust the one person she thought she’d lost forever, Danker. Instantly, sparks fly between them, and as much as she wants to rekindle their relationship, she must protect her heart.

An old enemy, Seamus McGinn, breaks out of a maximum-security prison and invites Danker to a meet-up. Surprisingly, the kidnapper joins forces with McGinn along with his sick fans. McGinn trumpets his ‘murders by ice pick’, and it’s up to Danker to stop him. The whole island is on edge with a live feed from the maniac’s website.

In a stolen moment, Jolene shows him hope, and he makes a snap decision that will change their lives forever. Will he make it back to show her?