Do you adore books with witches and wizards? Please meet romance writer, Leslie Hachtel, who sold an episode for a TV series and a screenplay optioned.  Stay tuned for more about this super talent. Now for her book, Dream Dancer,  which has 55 reviews and is free on Kindle Unlimited. 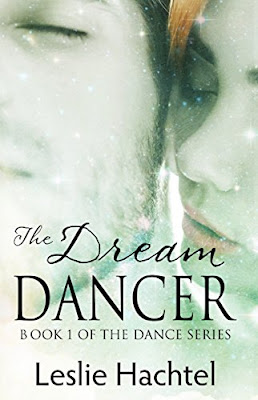 Blurb:
Lady Bryce has a gift.
She can enter dreams and persuade her will onto others.
It has served her well, especially in eliminating unsatisfactory suitors of her father's choosing.
But when she encounters Lord Rowland she wants him more than any-thing and decides to visit him in his sleep and make him desire her above all others.
As a virgin, she has discovered a diary from a leman who describes seduction in detail.
When she has driven Rowland to the edge of longing, she extracts a promise that he will marry her.
As time passes, Bryce and Rowland fall in love.
But will their love be able to conquer all once Bryce’s secret is revealed? Rowland must decide if he truly loves her or has been bewitched.
Excerpt:
The English countryside outside London, 1616
Chapter One
Rowland of Ashford leaned casually against the rough stone wall at the edge of the marketplace as if he hadn’t a care in the world. He unconsciously ran his fingers through his thick black hair. He was captivated. The way the sunlight played hide and go seek in the red gold strands of her hair was fascinating. She was the most beautiful woman he had ever seen. Her eyes were a brilliant green, like the meadows dressed with morning dew. Her tiny waist and full, creamy breasts peeking above her bodice begged for his attention.  She was obviously well bred and came from wealth. That would probably mean she was accustomed to getting her own way. Rowland smiled. So was he. The thought of a bit more challenge than bedding the women at court had his blood flowing. Perhaps doing good deeds did have rewards and this one would yield more than favors from the king. And who was he to turn his back on a personal recompense? He pushed himself off the support and blocked her path.
“Forgive me, my lady, but I must beg a favor.”
She looked him up and down and he could see from her expression she found him appealing. He cleared his throat, trying to draw his thoughts from his swelling manhood. It would not do to embarrass himself in public.
“My lord? We have not been introduced. What favor dare you ask?”
“My name is Rowland and I but plead for a few moments of your gracious company before I must go off on my quest.”
“Your quest, my lord?” Her emerald eyes sparkled with amusement, as if daring him to impress her.
“I must slay a dragon.”
She giggled and turned to the ladies who flanked her left and right. They could not contain their mirth. She directed her gaze back to him. “My lord, there are no such things as dragons.” She spoke as if sharing some great truth with a child.
“Really, my lady. Please do not tell the dragon that, for I fear you will offend him. And his wrath might be terrible.”
Meet Leslie!

Leslie Hachtel was born in Ohio, raised in New York and has been a gypsy most of her adult life.  Her various jobs, including licensed veterinary technician, caterer, horseback riding instructor for the disabled and advertising media buyer have given her a wealth of experiences.  However, it has been writing that has consistently been her passion. She sold an episode of a TV show, had a screenplay optioned and has so far produced ten novels, including seven historicals and three romantic suspense. Another historical, "Bound to Morocco" is due out this month.  Leslie lives in Cordova, Tennessee with a fabulously supportive engineer husband and her writing buddy, Jakita, a terrier.