Have you ever considered speed dating? Take a vicarious journey and fall in love with this talented author's writing.

Please welcome Sofia Londe and get a peek into her fun book, Just One Night- 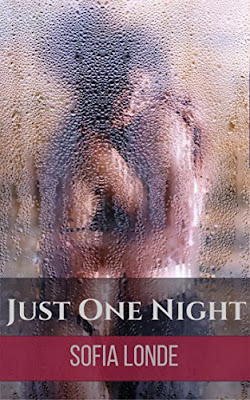 Free on KU!
Blurb
Clara came to the bar looking for a date for her sister’s wedding, but she ended up falling for Rob the bartender instead. She feels an attraction for him unlike anything she has ever felt before. But since one night is all he’s prepared to offer her, she’ll take it. Anything to feel his lips against her skin, and hear his voice whisper dirty words in her ear.

When Rob Fraser sees Clara Magnelli for the first time, it’s lust at first sight. He wants her, badly. And when he gets to know her, it’s not just her body that he wants. But his past is holding him back. No matter what he feels for her, one night is all he has to offer.

But one night soon turns into more, and Rob finds himself falling for Clara, too. He knows he has to tell her the truth, even if it means he’ll lose her forever.

Excerpt
Rob wondered what exactly it was about Clara that affected him so. Rob knew he was good-looking; it had more than once earned him good money in tips from female guests. And he was a bartender, for crying out loud. Getting hit on by women in all stages of inebriation was all too common, he should have become immune by now. What was it about this woman who, as far as he could tell, was as sober as a judge? What made her different?

Apart from her stunning looks, of course. That long dark hair, those curves that were in no way hidden by that red lace-concoction of a dress, those longs legs in their high heels… She was gorgeous, there was no denying that. But this was New York City! Gorgeous women were twenty to a dozen here.

Clara smiled warmly. “Thanks for the drink, it was once again delicious.” She fidgeted with the clasp on her purse. “I don’t think I paid you for it,” she said as she pulled out her Visa.

“Forget about it.” Rob closed his hand over hers in midair. “You saved me the trouble of having to get that guy thrown out. The drink is on the house.”

Clara went completely still and her gaze locked on his. Rob became intensely aware of their hands touching, and the feel of her soft knuckles under his fingers. Still holding her gaze, he let his hand slide down to clasp her wrist where he could feel her pulse beat. He gently caressed the sensitive skin on the inside of her wrist, seeing her swallow, and the tip of her small, pink tongue dart out and wet those gorgeous, full lips. God, he wanted to kiss her. And not just her lips. He wanted to bring her wrist to his lips and kiss her there, too. He wanted to gently lick her pulse point and hear her moan in pleasure. He wanted to suck on every one of her fingers until she begged him to stop.

Bio
Sofia calls herself a tireless vagabond; she left her native Sweden at the age of seventeen and has been traveling all over the world ever since, her favourite place by far being London, England. Her resumé is longer than the Bible, spanning such far-apart jobs as nurse, bra fit specialist at Victoria’s Secret, waitress, and roller coaster operator at Disneyland Resort Paris.

Her love affair with the romance genre began when she, at the age of eleven, stumbled across her mother's stash, and discovered the happiness romance literature brings the reader. She didn't begin writing in earnest, however, until she, a major Harry Potter geek, discovered Harry Potter fanfiction, which she still reads to this day.

After a year in Vancouver, Canada, Sofia just recently returned to her native Sweden with her fiancé, who makes sure she remembers to eat when she becomes consumed by her writing.