Bandera, Texas is known as the “Cowboy Capital of the World.”


People from all over the world travel to Bandera and stay at dude/guest ranches to experience Texas.


Bandera is Spanish for “banner” or “flag”


St. Stanislaus Catholic Church in Bandera is the 2nd oldest Polish church in the United States.


Although Pamela visited Bandera as a child with my grandparents, she did not return to that area until 2001 for a book signing. However, since 2010, she lived and worked at the Silver Spur guest ranch in Bandera, Texas for months at a time.
Now that's special, and so is The Tempered Series. 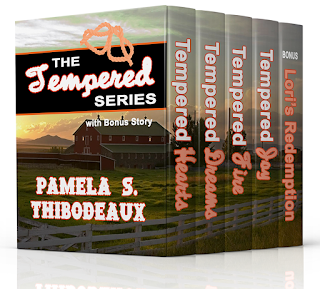 
Now all 4 titles in the Tempered Series by Pamela S Thibodeaux are combined into a single book along with a bonus short story and a sneak peek into #5 in the series Tempered Truth (coming sometime in the near future)!

Start at the beginning and follow these beloved characters throughout the years as love crosses the lines of age and strengthens the bonds of friendship.


Available at Amazon, B&N and Smashwords


For the first time, Craig noticed how tired she looked and felt a tug of remorse. “I’ll tend him for you,” he offered. “Maria will show you to your room.”


“Nonsense,” he argued, stepping off the porch and heading toward the trailer. “Never met a horse I couldn’t handle.”


Tamera rolled her eyes. “Arrogant jerk,” she muttered under her breath, then blushed when the Senior Craig Harris chuckled. “Wait,” she called, as Craig reached for the door. “Please, just let me get him,” she insisted, grabbing his hand. Craig grinned at her obvious concern, a smug, lazy smile that made her stomach knot with tension.


“You afraid for me, little one?” he inquired in a soft, husky tone.


Tamera looked into his teasing eyes and ground her teeth in frustration. He was as conceited as he was arrogant! “I couldn’t care less if you got your skull kicked in. Probably do you some good,” she bit out, pushing him away from the trailer. “My only concern is that he’ll hurt himself while doing you the favor.”


“I’m Katrina. I’ll be your...” her voice trailed off as she gazed into the sparkling eyes of Dr. Scott Hensley.


Scott grinned, surprised and pleased to have finally run into her. He’d often wondered and prayed that he would. “You’ll be my what?”


His eyes shone with mischief, his voice lowered to a husky tone. Trina flushed. Everything about his presence made her nerves hum. “Waitress,” she managed on a suddenly dry throat.


She smiled. “Okay, busy. May I get you something?”


“Bourbon and water. Alternate that with a coke. Oh, in case I forget,” he stopped her hasty retreat with a wink. “Two’s my limit.” Katrina laughed. The silky, tinkling sound made Scott think of wind chimes.


“You don’t seem like the type to forget anything,” she remarked.


Know it, Sweetheart, he thought as she walked away, the subtle sway of hips crowding his mind.


Craig paused at the barn entrance. “I wonder what he wants,” he muttered. It hadn’t set well with him that the boy didn’t introduce himself the day he brought Amber home from school, nor had he made a point to do so since. And it irritated him royally that Amber walked around singing some long-forgotten Carpenter’s song about a guy with ‘gold dust in his hair and golden starlight in his eyes of blue.’ She used to hate that song, always said it was corny.


He hated it now.


“He probably wants the same thing you wanted at his age,” Tamera teased, seeing his eyes darken and jaw harden.


“That’s not funny, Temper. When I was his age I had a truckload of responsibility on my shoulders. I didn’t have time to court a girl without the thought of meeting her parents.”


“Court?” Tamera laughed, rolling her eyes. “Is that what you call it?” she shook her head. “I swear, sometimes I think you were born in the wrong century.”


Ace clapped his hands together and blew on his fingertips for warmth. “One more time,” he implored his father. “One more time then we’ll call it quits.”


Craig nodded. “Okay Ace. That old bull is getting tired, so is this one.”


Ace grinned. “Old my foot, you love it and you know it. Makes you think of your younger days.”


Craig grunted. “My younger days were not spent chasing bulls.”


Ace laughed. “No? Chasing what then?”


“Never you mind,” his father replied with a grin while the ranch hands penned the bull in the chute.


Rafe Judson made his way to the arena with a smile on his lips, a song in his heart, and the same old limp in his stride. An ex-bull-rider, he still loved everything about the rodeo…the scents—the hay, the horseflesh, the sweat—the excitement, the crowds. As a minister, he didn’t enjoy the accidents or the deaths. He could do without a lot of the language, too.


Remember where you came from old boy.


The thought brought with it a quick stab of conviction.


Wasn’t so long ago he'd cussed and caroused along with the other cowboys. But all that changed with the accident that ended his career as a champion rodeo rider, but opened a whole new world to him, a world filled with faith and optimism.


Far cry from the cynical, bitter cowboy he once was. 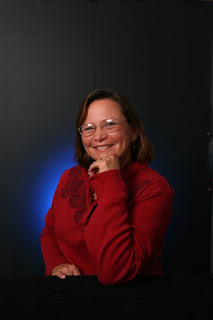 Author bio: Award-winning author, Pamela S. Thibodeaux is the Co-Founder and a lifetime member of Bayou Writers Group in Lake Charles, Louisiana. Multi-published in romantic fiction as well as creative non-fiction, her writing has been tagged as, “Inspirational with an Edge!” ™ and reviewed as “steamier and grittier than the typical Christian novel without decreasing the message.” Sign up for Pam’s Newsletter and get a FREE short story! http://bit.ly/psthibnewsletter