Today I have my spotlight on The Vegas Gambler by Adriana Kraft.  This is
Meghan’s Playhouse Book 5, a new release from Extasy books 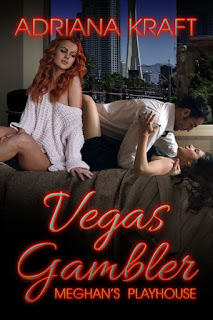 
In our Meghan’s Playhouse series, we’ve written two heroes over fifty. The series follows our sprite of a heroine, Meg Keenan, for a decade, starting in her early twenties. Her main squeeze in A Woman for Zachary (book 2) is something of a sugar daddy who helps her get her start on Broadway. In turn, she helps him finally recognize the love of his life, her drama coach.


By book 5 (Vegas Gambler) she’s a successful actress, and she’s enjoying the company of another older man. Of course, what happens in Vegas stays in Vegas, but we think none of the four characters who get together in Vegas Gambler is aware of all the games being played…


Time off in Vegas with her latest squeeze? Nothing could be better—unless maybe Meg adds another woman, or perhaps another man as well. What happens in Vegas…


Fresh with success from a recent stint in a musical on the Las Vegas Strip, Meghan Keenan takes some time off to play with her current flame, Jack Hawthorne, professional poker player. She’s delighted to add her petite masseuse Tia Minh to the mix and even more thrilled when she learns Tia’s relationship with her boyfriend Tony Sanders is on the skids. It’s the perfect challenge!


Tia has different ideas—she thinks Tony would be perfect for Meg, and she conspires to throw them together any way she can.


Ever the gambler, Jack catches on to Tia’s game quickly and keeps the ruse going behind Meg’s back. Who knew his heart was up for grabs?


Meg kept her gaze fixed on Jack Hawthorne, who sat across from her at the small round wicker table. He was paying half attention to her and half to the solitaire cards spread out before him. She tried her best to decipher Jack’s response to her announcement that she’d be entertaining Tia on Sunday.


Not for the first time, she wished she hadn’t given up her own condo when she’d agree to extend her Vegas stay eight weeks or so after the show closed to help with the local community theater and to frolic with Jack, whom she’d grown to like and admire a lot. Still, he was a professional poker player and an expert at concealing his emotions. “So it doesn’t bother you,” she pressed on, “that I’ve made plans with my former masseuse?”


Jack looked up from the cards to stare at her. His dark eyes softened. With one hand he swiped at a lock of black hair that often threatened his brow. “Why should it? You’re your own woman. I don’t have a brand on you. I know you’ve been with other women during your time in Vegas. Why should this one matter to me any more than any other?”


“Because I’ve never invited a girl to your place,” Meg huffed. “I do wish I’d kept my apartment.”


“Nonsense. That would’ve been a waste. Besides, I like waking up with you at my side.”


Together we have published more than forty romance novels and novellas to outstanding reviews. We love hearing from readers at adrianakraft99@yahoo.com, and here is our website: When It’s Time to Heat Things Up https://adrianakraft.com 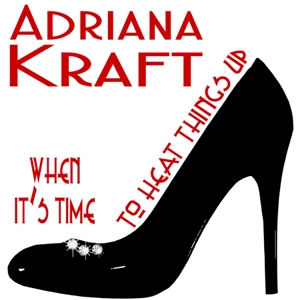