Happy New Year weekend! Deadly Alliance and other books from Tirgearr Publishing are available at 99 cents/ 99 pence on Amazon.  Below is a description and excerpt. 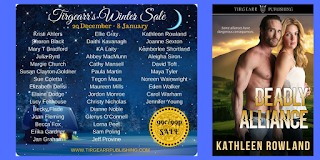 
Dog that he was, chasing after Les’s bone, Amy might be sniffing along the same trail.
at December 29, 2017