It is such a pleasure to spotlight talented Lyndi Lamont today.  Before we get to her book, Tova's Dragon, which is available for pre-order, Lyndi will share an inspirational message: I believe love is a powerful force in this world. It brings lovers together, creates families and lives on after death in the hearts of those left behind. It may not make the world go 'round, but love makes the world a better place. 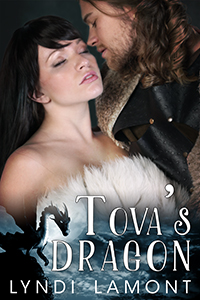 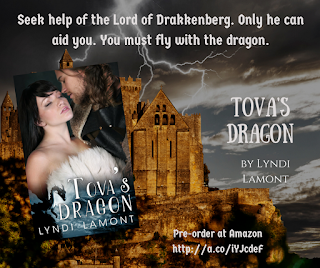 Seek help of the Lord of Drakkenberg. Only he can aid you. You must fly with the dragon.

Tova Svensdottir, an earth mage, is on a mission to save her homeland, the Kingdom of Velosia from the evil wizard Bruno of Grimmdorn. Her grandmother tells her to seek help of the Lord of Drakkenberg, but the old lord is dead. In his castle, high on a mountaintop, she instead encounters his son, the Outlaw Kane.

Kane fled Velosia after a futile attempt to rescue his father and his mate from Bruno's cruel prison, killing the head guard in the process. Now that Bruno has been banished, Kane has returned to clear his name, but his purpose changes when he meets Tova.  Tova's warmth stirs his passions and her courage touches his heart, but he dreads telling her of his true nature, certain she will recoil. But Tova is made of sterner stuff.

Together, Kane and Tova have the power to save Velosia. If they survive the coming battle. But can an earth mage find happiness with a dragonshifter?

Available at Amazon for pre-order:

Seek help of the Lord of Drakkenberg. Only he can aid you. You must fly with the dragon.
Her grandmother’s words rang in Tova’s head as she climbed the path into the mountains. Why had Mutti Zee sent her out of her way on a fool’s errand? Everyone knew the dragonfolk had fled Velosia years ago, driven away by Bruno of Grimmdorn’s crusade against them. Until he’d been driven from power. Now Bruno had returned at the head of a mercenary army, if Mutti Zee’s vision could be believed. And Tova had no doubts. She’d felt the vibrations in the earth.
And somehow she was supposed to save the kingdom?
She raised her gaze to the sky and asked, “Why me? I’m no hero.” The heavens gave no answer, though she saw clouds form to her left. She shook her head. Now she was talking to herself, like mad Magnus, the village idiot.
She stopped to catch her breath and rest her tired legs in a level area. The path ahead grew steeper and narrower the higher it wound into the mountains. She groaned. After walking all day, her legs ached. She was glad she’d worn men’s breeches and a tunic with her sturdy boots. A gown and petticoats would be but a hindrance.
After a deep breath, she started to climb again. Dusk came early in autumn, and she needed to find shelter before dark. Castle Drakkenberg, abandoned and forlorn, perched high above on a cliff, its turrets silhouetted against the leaden sky. Almost as if mocking her with its remoteness. Too much was at stake and her chances of reaching the capital in time to warn the king were slim at best. Even without this detour, she estimated the journey to Castle Novita would take three days or more.
For centuries, the dragon lords had resided in the castle, ruling the isolated mountain communities. People in this area were known as dragonfolk, though Tova knew not why. A great puzzle, but one she had no time to ponder. With luck, she had but to find the dragonlord, and he would take charge of the quest.
A shadow blocked the sun, and she looked up at an enormous bird silhouetted against the sky. Goddess, she’d never seen such a large raptor. It turned and the sun’s rays glinted on its shiny red-gold wings and barbed tail. She stopped and stared after it, shaken to the core of her being.
No, impossible. Dragons didn’t exist. They couldn’t.

Tova awoke to find herself on a soft bed wrapped in the embrace of a very hot, very aroused man. She opened her eyes to look around the dimly lit chamber, and everything came back to her—the climb up the mountain, the lightning storm, being guided to the cave, and the fall in the tunnel.
She squirmed around to stare at the man. “Where am I? And who you are?”
He flashed a reassuring smile. “I am Kane and this is my cave. You fell and hit your head.”
She studied the face just inches from her own. He was older than she, perhaps in his third decade. Long black hair hung down to his shoulders, and his eyes were a warm shade of amber under straight black brows. Her gaze dropped to sensual lips above a cleft chin. He was handsome as sin and naked to the waist. A shiver traveled up her spine and her heartbeat increased. Why did his name sound familiar?
Around his neck he wore a heavy gold chain with a large, luminous pearl dangling from it. When she reached out to touch the pearl, she sensed power radiating from it, from him. “You guided me to the cave, did you not? I thank you.”
“You are welcome, daughter of earth.”
She smiled at the apt nickname. “I am called Tova Svensdottir.”
He nodded in acknowledgement. “How are you feeling, Mistress Tova?”
She assessed the situation. Though warmer, her head still hurt and her energy was depleted. Self-healing would take a long time in this state. “Better, but still weak.”
“I am not surprised, given your ordeal. Where were you headed in such a hurry, and what on earth brought you to my mountain? Are you lost?”
She hesitated, uncertain whether to trust him. Mutti Zee’s instructions echoed in her head and she plunged ahead. “I seek the Lord of Drakkenberg.”
Kane raised his brows. “You have come to the right place, though the old lord is dead.”
Suddenly, she realized who he was and scooted away from him. ’Twas just her luck to be rescued by the most feared outlaw in the land. “Please do not hurt me, Kane of Drakkenberg.”
With a sigh, he rose from the bed, clad only in his breeches and hose. He stared down at her, an earnest look on his face. “I would never hurt you, Mistress Tova. I am not the monster legend depicts me.” He ran a hand through his hair. “Well, not entirely.”

About the Author, Lyndi Lamont-- 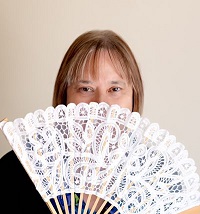 Lyndi Lamont is the racy alter ego of romance author Linda McLaughlin. Writing sexy stories gives her a license to be naughty, at least between the pages of her books! She has written several full-length novels plus numerous short stories and novellas, ranging from historical to futuristic. She believes that love is unending and universal, and enjoys transporting her readers into a different world where her characters learn that, in the journey of life, love is the sweetest reward.
Connect online:
Website: https://lindalyndi.com
Reading Room blog: http://lindalyndi.com/reading-room-blog/
Facebook: http://www.facebook.com/LyndiLamont
Goodreads: http://www.goodreads.com/LyndiLamont