The BookQW is DAY.  On Wednesday authors share a captivating moment.  The word day shows up twice in the scene below between lawyer, Grady Fletcher, when he picks up his client, Tori Morningstar who had been framed for a murder she did not commit. 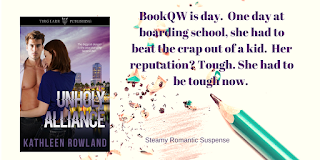 
On this day Grady’s clean-shaven face meant he’d head to court soon, and she left him to his thinking. If he had stubble, as he sometimes did during prison consultations, it’d match his reddish-brown hair, parted and combed back. Between them, his Brooks Brothers suit jacket had been folded lengthwise, then horizontally. As a public defender, he made an immaculate appearance without spending a lot of money. He defended those who couldn’t defend themselves. He obtained grants and federal funding with his spotless reputation.


Reputation? Growing up, Tori defended her mob family. One day at boarding school, a kid taunted her, saying his parents thought her father was a mobster. Tori beat the crap out of the kid. Afterward she’d looked up the word, and truth unraveled. Many things came into focus. Charm, ruthlessness, and a win-at-all-costs mentality defined mobsters. Psychopathy was more like a wide rainbow than black and white. She didn’t think her first cousin, Vivienne, was high on the scale. Nausea swirled in her stomach whenever she thought of Vivienne.
at October 11, 2017