Today I have my spotlight on Kris Bock's book, the Mad Monk's Treasure! Have you ever wondered if you could find gold in the Southwest? 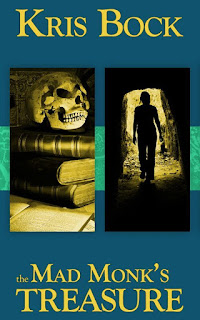 A legendary treasure hunt in the dramatic – and deadly – New Mexico desert....

The lost Victorio Peak treasure is the greatest of treasure-hunting legends, filled with riches from a heretic Spanish priest’s gold mine, bandits, and an Apache Chief.

Erin, a shy history professor, uncovers a clue that may pinpoint the lost cave. She’s ready for adventure, but when a hit and run driver nearly kills her, she knows she’s not the only one after the treasure. And is Drew, the handsome helicopter pilot who found her bleeding in a ditch, a hero or an enemy?

Erin heads into the New Mexico wilderness with her brainy best friend Camie and a feisty orange cat, Tiger. The wilderness holds its own dangers, from wild animals to sudden storms. Meanwhile, dangerous men are on Erin’s trail, determined snatch the treasure from her grasp. How far will Erin go to find the treasure and discover what she’s really made of? And will Drew be there to help her in the end?

“The story has it all—action, romance, danger, intrigue, lost treasure, not to mention a sizzling relationship....”

“The action never stopped .... It was adventure and romance at its best.”

“I couldn’t put this book down. You’ll love it.”

This book was originally published under the title Rattled.

Fans of Mary Stewart, Barbara Michaels, and Terry Odell will enjoy these stories of love in the wild, from an award-winning author.

Among all the legends, all the fact and fiction, one story stood out. The Victorio Peak legend had it all. A Franciscan priest and a swindler. Torture, murder, a government cover-up. Where was the truth, among all the stories? Erin wanted to find out. Over time, and with Camie’s encouragement, she’d started to take the treasure hunt more seriously. It wasn’t so much for the treasure itself, which would most likely belong to the government or the landowners. But it would make her reputation, open up new job opportunities – change her life in ways she hardly dared dream.

She touched the book gently. The pages were falling out; she didn’t want to risk carrying it around. Instead, Erin snapped a picture of the petroglyphs with her phone. That would be enough to show Camie for now.

The timing was perfect; she just had to turn in grades and field a few tearful last-minute requests for extensions, and she’d be done for the semester. What better way to spend the summer, than hunting for buried treasure?

Erin shook her head. Who would’ve thought that she, the quiet, studious girl who’d spent her entire adult life in academia in one way or another, would be planning such an adventure?

Erin wheeled the bike around the front of her house and mounted. At the corner, she paused and looked both ways. The long frontage road was dangerously narrow, with a cement wall on one side and a ditch on the other. Fortunately, traffic was normally light, and at this time of day the road lay empty. Erin pushed off, still grinning from her find. She rode on the right side, by the ditch, instead of facing traffic, because it was too frightening to ride alongside the wall when a car passed.

She’d gone a block when she heard the hum of a car engine as it pulled out from a side street behind her. She rode along the very edge of the pavement, even though the car would have plenty of room to pass her without oncoming traffic.

Erin glanced over her shoulder. The black SUV twenty feet behind her hadn’t bothered to pull out into the road at all. Jerk. When would drivers learn to share the road with bicyclists? Erin pulled onto the two-foot wide gravel strip between the pavement and the ditch. She couldn’t stop without risking a skid, but she slowed so the SUV could pass.

Black metal bore down on her. Her heart lurched and the bike wobbled. This guy was crazy! She whipped her gaze forward, rose up in the seat, and pumped the pedals with all her power, skimming along inches from the ditch. He was just trying to scare her. She’d get his license plate and—

She felt the bumper hit her back tire. The bike seemed to leap into the air, and she went flying. The dried mud and weeds of the ditch seemed to rise up to meet her.
She didn’t even have time to scream.

Get the book free at these ebook retailers:

Kris Bock writes novels of suspense and romance with outdoor adventures and Southwestern landscapes. Whispers in the Dark features archaeology and intrigue among ancient Southwest ruins. In Counterfeits, stolen Rembrandt paintings bring danger to a small New Mexico town. What We Found is a mystery with strong romantic elements about a young woman who finds a murder victim in the woods.

Read excerpts at www.krisbock.com or visit her Amazon page. Sign up for Kris Bock newsletter for announcements of new books, sales, and more.