Today I'm honored to shine my spotlight on talented author, Daryl Devoré, and the second book in her  "Two Hearts, One Love" Trilogy, Darien's Desire. 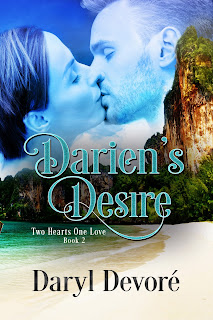 Blurb – You've read What Happens in Bangkok and now you need to know what's next.
It's complicated is not only her relationship status, but the definition of Erika Bailey's life. She loves managing her drag queen club in Bangkok, Thailand, but her rock star boyfriend resides in North Carolina. And to top it off, her father threatens she must stay away from Darien or lose the Pink Flamingo. Does she protect her club or her love?

Darien Scott, Grammy award winning international superstar, wants nothing more than to wake up in the arms of Erika, the woman he loves, but contractual obligations force him to exotic video shoots and an isolated movie set with one of Hollywood's sexiest stars.

With the feeding frenzy of social media trending every aspect of Darien's life—real or not—it's hard for Erika to know the truth. Will she be able to see through the lies and trust Darien? Or will evidence from damaging Internet rumors condemn their relationship?

Excerpt
England! Erika stepped out of Heathrow Airport and shimmied. She loved England. Fabulous childhood memories. A tinge of guilt nagged at her, but she'd convinced herself that Darien could deal with a one day later arrival. He'd be happy to know she was treating herself to something fabulous. She snorted. Or as her divas would say, "Fab-U-lous!"
She'd sent Darien a text, so at least he wouldn't waste his time driving to the airport. After all, he'd paid for the first-class ticket. It'd be rude not to let him know where she was. The change in her itinerary hadn't cost her much, and she so wanted this gift for herself, so she could be stress-free and at her best for Darien. That worry was erased with happiness as she stood soaking in the locale, listening to accents and grinning.
For the first time in about two years, she wasn't in Thailand. Not that she didn't love living in such an exotic country, but it was always good to get away and charge up the batteries.
Looking down the row of hotel shuttle buses, she located hers, The Victoria by the Park, and boarded. She tucked her luggage on the rack and settled onto a window seat on the right side of the shuttle. Families trudged past her. Parents with two young children sat behind her. The children were wide-eyed with curiosity. The parents looked exhausted. Businessmen passed her, busy on their cell phones, glancing up long enough to find a seat and continue texting.
Her hand edged toward her purse, but she caught herself. She wasn't going to bury her nose in her cell. She'd sent a message to Darien. Well, she was pretty sure she had. The phone seemed to hiccup just as she hit send. That last update had wreaked havoc on her cell. Maybe she should check? She frowned and scolded herself. She didn't need to know if there was a crisis at the club. Stewart and Brian could handle whatever came up. As long as The Pink Flamingo was still standing when she got back, she'd be happy. This was her vacation, and in a couple of days, she'd be wrapped up in Darien's love.

Buy Link
(will send when I get them)
Bio
Daryl Devoré (@daryldevore) lives in an old farmhouse in Ontario, Canada, with her husband, a large aquarium full of fish, a black cat named Licorice and some house ghosts. Daryl loves to take long walks up her quiet country road, snowshoe across the back acres, and in the summer, kayak along the St. Lawrence River. She's touched a moon rock, a mammoth and a meteorite. She's been deep in the ocean in a submarine, flown high over Niagara Falls in a helicopter and used the ladies room in a royal palace. Life's an adventure and Daryl's having fun living it.