Today I have my spotlight on Happily Ever After by Ruth A. Casie!


He was the cause of her fall from literary stardom until he became her salvation. 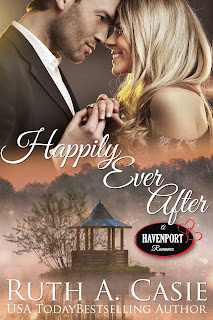 Back Cover Copy:
From a fall from literary stardom to becoming the heroine in her own romance story, Beth Holmes has turned around her career and her love life. She owes it all to one very special person.
Jarred Watson has loved Beth since he read her first novel and suspected the heroine was the embodiment of the author. But the road to romance was fraught with pitfalls. He almost lost everything because of a conniving agent and a little white lie that got out of hand. At the eleventh hour, with honesty and hard work, their book sales are off the charts and a movie deal is in negotiations.
Interfering families and changed plans take their toll. Will they go their separate ways or will Holmes and Watson continue their literary collaboration and personal partnership in order to find their own happily ever after?
Excerpt:
“Interesting.” He chuckled. “Men are not known for their empathy.” He brought his chair closer to hers. “Like stress,” he said. “Under stress, men exhibit the “fight or flight” response.”
Beth nodded. She hadn’t considered the differences in gender reactions in that context. “Women don’t think fight or flight, at least not initially. Under stress they work to protect the group. It has to do with protecting the young and seeing to the family unit. They also think very differently about sex.”
A sly smile brightened his face. She wanted to slam her hand over her mouth.
“We do?” He dropped his voice to a low raspy whisper and sent chills, the good kind, up her back and to other places.
“For a woman, sex starts in their head, not necessarily between her legs.” Shit. Her face was so hot she was going to go up in flames. Jeez, that’s what her heroine Jo Dee would say, definitely not Beth Alexander.
“Oh really?” If she thought his soft, male mellow voice or his smoldering stare couldn’t get any sexier, she got that totally wrong.
“I’m a romance writer. I write about relationships and emotions,” she replied.
“And sex,” he added. Was he extending an invitation? She wasn’t a loose woman, but she was more than tempted to say yes. And that was her notion, not Jo Dee’s.
Purchase Links:
Amazon/Kindle: http://a.co/8DGxCzf
iBook: https://itunes.apple.com/us/book/happily-ever-after/id1231892165?mt=11
Kobo: https://www.kobo.com/us/en/ebook/happily-ever-after-69

Ruth’s Bio
RUTH A. CASIE is a USA Today bestselling author of historical swashbuckling action-adventure time-travel romance about strong women and the men who deserve them, endearing flaws and all. Ruth also writes contemporary romance with enough action to keep you turning pages. She lives in New Jersey with her husband, three empty bedrooms and a growing number of incomplete counted cross-stitch projects. Before she found her voice, she was a speech therapist (pun intended), client liaison for a corrugated manufacturer, and international bank product and marketing manager vice president, but her favorite job is the one she’s doing now—writing romance. She hopes her stories become your favorite adventures. For more information, please visit www.RuthACasie.com or visit her on Facebook, @RuthACasie, Twitter, @RuthACasie, or Pinterest RuthACasie
Ruth’s Links:
Personal Blog:  http://www.ruthacasie.blogspot.com
Twitter:  http://www.twitter.com/RuthACasie
Facebook Author Page: http://www.facebook.com/RuthACasie/
Amazon: http://amzn.to/13GwuQ1
Bookbub: https://www.bookbub.com/authors/ruth-a-casie