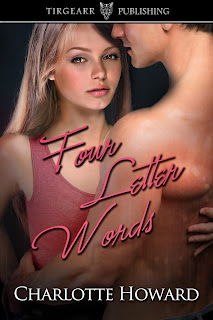 
Paige Holmes has made her choice. But as she begins to get her life back on track, she also starts to question her decision.


Then, the letters arrive. When Paige finds herself in trouble once again, she must decide who she can trust.


Will she go back to the one she denied, or will she stand by her choice?


Love and lust are, after all, both Four Letter Words.


Laying my head back against the black leather seats of the Jag and gazing
ahead, I lifted a finger and touched my lips that were swollen from his kiss. The
weariness of the past few weeks was beginning to take over, weighing on my eyelids
as they began to droop. I should have been reassured by the man sitting next to me.
I shifted in my seat so I could watch him as he drove on. He was a force that
even nature had no hold over. There was an urge to reach out and cling to his broad
bicep, a need to feel the security of his physical strength, aching somewhere deep
inside of me.
We didn’t speak as he pressed all his weight onto the accelerator, urging the car
until it was over the speed limit. I half expected the shine of blue lights to fill the
inside of the car, with sirens blaring around us. But they didn’t. Of course they didn’t.
Even if a marked car was to pass, I doubted Vance Ellery would slow down, and I
had even less that the police would attempt to pull him over. I suspected that the
personal phone number of every single high-ranking officer in the country, was
tucked away in a neat Rolodex on Vance’s desk or even stored in the memory bank
of his mobile phone for easy access.
The silence should have been soothing. I should have been able to let my lashes
flutter against my cheeks, and slip into a relaxing slumber. Instead the lack of
conversation added to the tension that built behind my eyes. I closed them, hoping
that soon I would drift off into a deep sleep, where I would be surrounded by falling
flowers, rainbows, and sunlight. Ha! If only I was deserving of such luck. There were
no pleasant dreams awaiting me after the sandman visited. Only nightmares wanted
to be part of my night. They tormented me, bringing memories that I’d tried to bury
and forget. They hounded the darkness, giving me nothing but misery and pain and
suffering. It was as though all my sins from a previous life had been rolled over into
this one.
If the visions of his face, the sound of his voice had been the only elements of my slumber, then I might have been willing to slip away and let the desperation of
rest take me to the shadowed places I dreaded. My soul was destined for torture
though. I was to be punished for his crime.