#romanticidea from Elizabeth @Delisi LADY OF THE TWO LANDS

Elizabeth Delisi shares her #RomanticIdea to enjoy this summer.  Invite your guy to the beach on a cloudy day. Walk the shoreline, picking up shells. Have a picnic while watching the waves.


LADY OF THE TWO LANDS 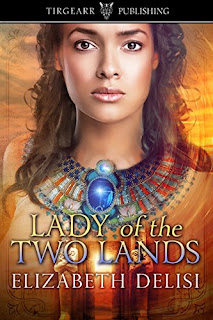 Blurb: One minute, Hattie Williams is in a museum, sketching a gold necklace that belonged to Hatshepsut, first female Pharaoh of Egypt; and the next, she's lying in a room too archaic to be the museum, with a breathtakingly handsome, half-naked man named Senemut bending over her.


Hattie soon discovers she's been thrust into the body and life of Hatshepsut, with no way back to her own time. Tuthmosis, the heir to the throne, hates her; the High Priest of Amun and the commander of the army want to kill her and Tuthmosis; and the best bathroom facilities in the country are the equivalent of a cat-box.


To make matters more difficult, she's falling helplessly in love with Senemut, and soon, she's not sure she even wants to return home. To protect Tuthmosis from assassination, the lovers arrange to put Hattie on the throne. But, what should she do when she suddenly finds herself, an obscure artist from Chicago, crowned ruler of all Egypt?


Excerpt: Hattie banged on the door. “Is anyone there? Let me out!” She shouted and beat on the door with her palms, but all was ominously silent. If someone had been watching her, they had no intention of helping her out of her dilemma.


At last, resigned to her fate, she returned to her sketchpad. “If I’m going to be stuck in here, I might as well finish my work,” she murmured. “Tom’s bound to come back—I’m sure he will.” Her voice echoed unconvincingly in the dusty, claustrophobic room.


Picking up her pencil, she focused deliberately on copying the tiny hieroglyphics with extreme precision. Gradually, she became absorbed in her work and forgot her predicament. Minutes flowed by with the only sound in the room the scratching of her pencil on the paper.


At last, she completed the final symbol on her detailed drawing and set down her pencil with a twinge of disappointment. She was curiously drawn to the glittering possession of the ancient, yet strangely modern woman. Hatshepsut had ruled Egypt fifteen hundred years before Christ, at a time when women were considered no more important than servants or dogs. How had she managed it?


The vagrant breeze whispered past her face again, leaving a whiff of exquisite perfume in its wake. A rustle, like the caress of costly linen against bare skin, drew her attention. She felt a strong presence, though she knew she was alone in the tiny room.


The words were so faint, Hattie wasn’t sure she’d actually heard them.


“Who’s there?” she asked, though she didn’t expect to get a response. The room was too small to hide anyone.


Hattie spun around, searching for the source of the barely audible words. “Tom, is that you? If it’s you, I don’t think this is funny! Open the door right now.” She thumped it with her fist for emphasis.


There was no response.


Hattie turned back to the exquisitely fashioned falcon. Maybe it was her overworked imagination playing a trick on her, but the advice seemed sound. Perhaps if she touched the necklace, she could make a connection—psychic, empathic?—with the long-dead monarch. The necklace was strangely compelling, like a long forgotten yet treasured memory.


She reached out slowly, cautiously. As her fingertips gently grazed the golden bird, an electric shock pulsed through her and a sudden wave of dizziness sapped her strength.


“Come to me,” the ghostly voice whispered, stronger now. “Come to me. I have need of you.”


The sweet, cloying scent of incense filled Hattie’s nostrils, and flashes of light exploded behind her eyes. Her vision blurred; she felt as if she were reeling, falling down a long, dark tunnel. Gasping, she reached out blindly for something, anything, to steady herself.


Her fingers skimmed across the surface of the table and fastened around the necklace. Clutching it, she fell heavily to the floor as everything went black.


Short bio: Elizabeth Delisi is an award-winning author of romance, mystery & suspense. Her books include an ancient Egyptian time-travel romance, LADY OF THE TWO LANDS; and a romantic suspense, SINCE ALL IS PASSING. FATAL FORTUNE is a paranormal mystery, and MISTLETOE MEDIUM and OBSERVANT ORACLE are sequels. Three of her romance novellas are combined in HEART SPELL. She also has a short story collection, THE MIDNIGHT ZONE.


Elizabeth teaches for Writer’s Digest University. She has also edited for several small publishers, and has been a newspaper reporter and columnist. Visit her at her web page: www.elizabethdelisi.com and her blog: http://elizabethdelisi.blogspot.com/